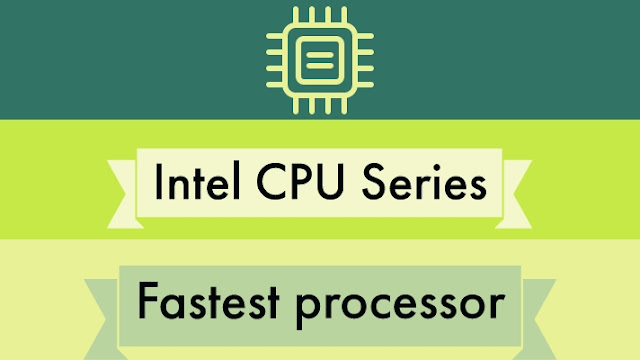 Hii everyone, we are always confused about intel processors series that which series is faster among them and which is good for Gaming or Streaming PC’s. So here is the lists of Intel CPU’s series with some info and about their sockets and compatible Motherboards.

CPUs are the brains of computers, mainly responsible for interpreting computer instructions and processing the data in computer software. There are two major CPU product series available in the market: Intel and AMD. The two manufacturers has their own advantages, but the important thing to note is that different motherboards have different corresponding CPU sockets.For example, the Intel X299 platform works only with Intel processors that use the LGA 2066 socket. In general, high-end CPUs have higher model numbers. Aside from price, the difference in performance is reflected in the number of cores, clock frequency, overclocking ability and cache size.

Intel main CPU are as follows:

Core i series  : The current mainstream CPU series on the market.

Xeon series  : Normally used on workstations and servers, does not typically include integrated graphics.

Here is a list of the current mainstream Intel CPU series compatible with motherboards:

The situation in laptops is a little different. First, relatively few laptops use Core i3 processors compared to Core i5 and i7, though it’s worth noting that two of the six Whiskey Lake and Amber Lake CPUs announced at IFA 2018 are Core i3’s.

Laptop Core i3’s are dual-core processors which feature both Hyper-Threading and Turbo Boost. Where are all the Core i3 laptops? This ‘entry-level’ processor hasn’t been around for as long as its Core i5 and i7 siblings, and often isn’t deemed low-end enough to fit into truly affordable laptops.

Manufacturers often use AMD and Intel Pentium CPUs in their low-cost models instead. The Intel Core i5-8250U and i7-8550U are very popular, however.

The Core i5 model has four cores, eight threads and Turbo Boost. So does the Core i7, but its clock speed and turbo are both faster. There isn’t a radical difference in the performance of these models.

The Core i5-8300H has four cores, eight threads – similar to the i5-8250U model made for slimmer laptops. However, the Core i7-8750H has six cores and 12 threads, giving it dramatically higher multi-core power.